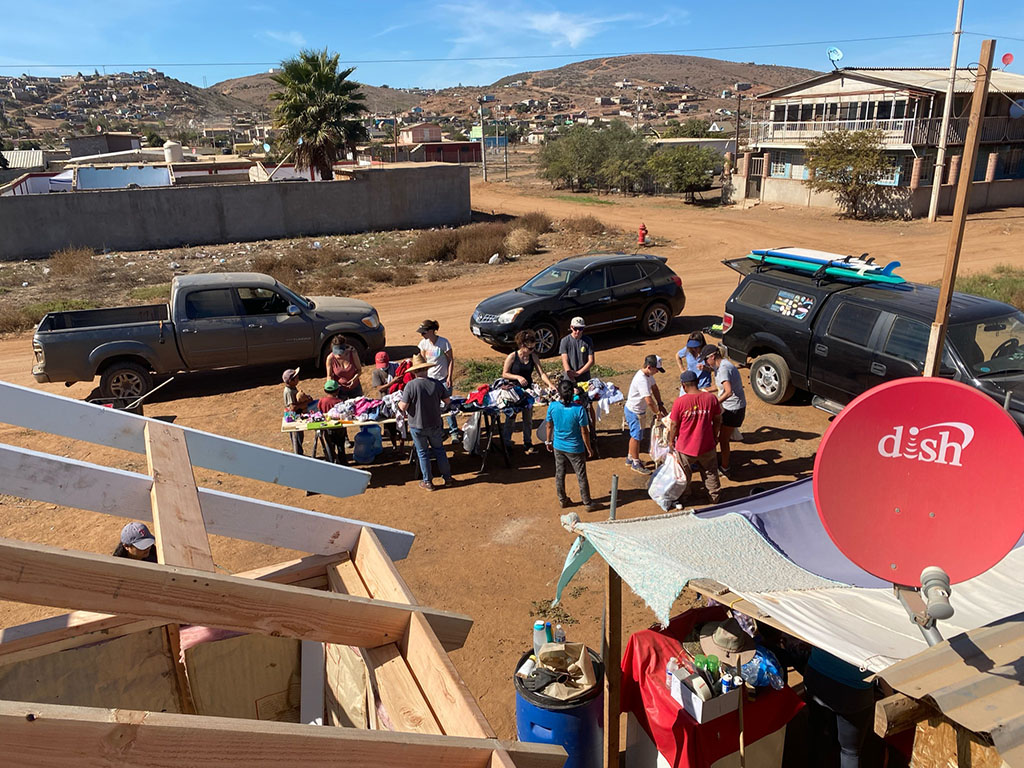 John Rose appears rock solid, steady, and squinting under the Baja sun, about ninety miles south of San Diego in Ensenada, Mexico. Standing in a migrant camp, John is surrounded by hundreds of families clad in lightweight hoodies and t-shirts. They carry little more than what they can hold in a bag or their hands, or strap to the back of a baby stroller.

These people are fleeing north from Guatemala, Chile, Haiti, and points south, first for economic reasons and more recently, for survival. In Haiti, as one example, political instability combined with the devastating earthquake in 2010 has led thousands of people to believe their chances for a safer, better life begins in Mexico.

Recently, and especially after the economic collapse caused by COVID-19 in Latin American countries, refugees are piling into southern Mexican states like Chiapas and Oaxaca. Once they arrive, Mexican immigration officials try to deport anyone not seeking asylum, but so many are seeking asylum they have no choice but to wait in stadiums and along roads in makeshift camps until applications are processed.

To put this in perspective for average Americans, imagine what you’d be willing to do or how far you’d be willing to walk if an earthquake knocked out electricity, water, and roads across much of the United States. Jobs are scarce and gangs roam around robbing men, raping women, and kidnapping children. The police are overwhelmed and have no equipment or fuel, and presidents and government leaders are routinely assassinated. In those circumstances, Canada wouldn’t just seem like a friendly place to visit, it’d be your only hope to ensure your kids are safe. And imagine Canadian officials can’t or won’t tell you how long a legal process that could take years will actually take. So you band together with other Americans on the outskirts of Vancouver and take whatever you can for work, food, and shelter knowing it’s still better than where you came from.

That’s the reality for many Latin Americans. They’ve fled north and now, to ease the burden on southern states, Mexican officials have begun transporting asylum seekers to other cities in Mexico while their wait trudges on. For those that have been waiting and have asylum or residency status, they’ve since moved northward again, usually in search of work and safety. That leads them to places like Ensenada where John Rose is standing today. 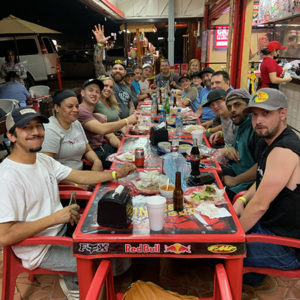 Rose, who speaks passionately with the heart of a deeply faithful, humane soul, routinely shows anyone who will listen the kinds of conditions people have setup for themselves.

Refugees scavenge abandoned plywood for use as walls atop dirt floors. Randomly sized sheets of metal make up the roofs, which leak when it rains and turn into broilers in the summer.

Rose’s nonprofit, Baja Bound, builds small, modest housing for these families —who often saved up enough to buy their own land—so they can get on with their lives in safer parts of Mexico. “The biggest thing we do when we build a house, is provide a solid floor with insulated walls,” says Rose. “I have a staff person who likes to say, ‘We take babies off of dirt floors’.”

Rose is quick to point out when you have a safe house, “No one steals your stuff, it doesn’t rain on you when you’re asleep, and no one’s sick from the wet and cold.”

Shared bathroom and shower facilities are used by hundreds of people and are no more than a bucket or small well in the ground. Sanitation is a struggle and children lack safe places to play, learn, and grow up healthy.

In the homes built by Baja Bound, “You have drywall, insulation, solar panels so you don’t have to pay utilities, and a water supply tank on the side of the house,” says Rose. The average resident in these homes makes about $7 per day, or about $350 a year. Solar energy and a clean water supply, he adds, “It’s a game-changer.”

Woodiwiss Painting has been helping Baja Bound by painting the interior and exterior of these new homes. Dull grays, browns, and soiled curtains or sheets are replaced by bright blues, purples, greens, and other lively colors.

“This is some of the most rewarding work we’ve ever done,” says Toby Woodiwiss, founder of Woodiwiss Painting. “We’ve sent teams down to Baja that come back changed people because of what they’re doing, but also because of the resiliency of the people they’re helping. It’s just a coat of paint, but for these refugees, it means a lot more when you’ve not had real walls for a long time.”

Entire neighborhoods—built by American, Mexican, and refugee volunteers of all ages—include community centers and vibrant, freshly-painted communal living similar to dormitories and modest single-family homes. These neighborhoods allow kids to play safely, learn music and the arts, and study language, culture, and math. Caregivers who no longer worry about housing and poor sanitation can instead focus on their jobs, farms, and raising families.

Baja Bound has been far ahead of this problem for twenty five years, serving as an orphanage, food provider, and home builder—all focused on giving people a hand up so they can sustain themselves. To learn more, volunteer, or make a donation, visit https://bajabound.org.