Presidential cover-ups do better with paint

Since the moment John and Abigail Adams moved into the new Executive Mansion on November 1, 1800, almost no President has wanted to live there. The Adams’ initial enthusiasm waned quickly. It was cold and damp in the winter, the smell of plaster lingered forever, and Abigail bemoaned hanging their own laundry in an empty room that would later become the East Room. Until the advent of air conditioning, most Presidents abandoned Washington’s humid summers for cooler climates in the northeast, too.

But history was already there when the Adams’ arrived, hanging in the form of the famous half-finished painting of George Washington in the stately manor. Adams wrote to his wife that he hoped “none but honest and wise men shall ever rule under this roof.” A phrase Franklin Roosevelt had inscribed in the wood fireplace and Harry Truman later had etched in marble when the fireplace was replaced.

John Adam’s hope for honest and wise men probably didn’t extend to the decorators. The White House, like any house, has endured many trends and questionable choices from their prior owners. During Andrew Jackson’s inaugural ball, revelers got so rowdy they destroyed $15,000 in furniture, stomped cheese into the carpets, and Jackson had to flee out the back window.

Ground cheese aside, the mansion sat mostly untouched until Theodore and Edith Roosevelt built and decorated the West Wing, including the initial Oval Office, and re-dubbed it “The White House”. His cousin Franklin would build the East Wing under the guise of hiding a bomb shelter, which became known as the Presidential Emergency Operations Center.

The mansion itself, however, “decided to collapse during Truman’s presidency”, wrote long-time White House usher J.B. West. At one point Truman’s bathtub began sinking into the floors. Truman, who had endured withering political criticism for having just built the balcony outside on the colonnade, laughed at the notion he might crash a meeting of the Daughters of the American Revolution while taking a bath. Ironically, the safest place in the house was the balcony.

From 1949 to 1952, the inside of the White House was completely gutted and rebuilt. 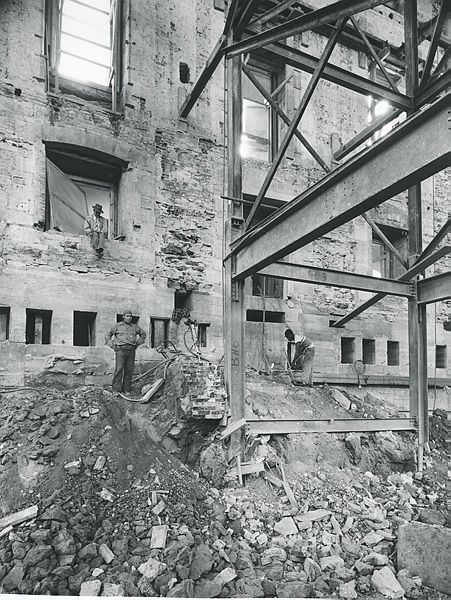 And this is where the start of modern decorating, taste, style, and paint trends begin.

Truman spent one year of his second term in the rebuilt White House. His wife, Bess, had the challenging task of picking out the decor, china, and wall colors and coverings. The tradition of naming rooms after their colors, begins with Bess Truman. 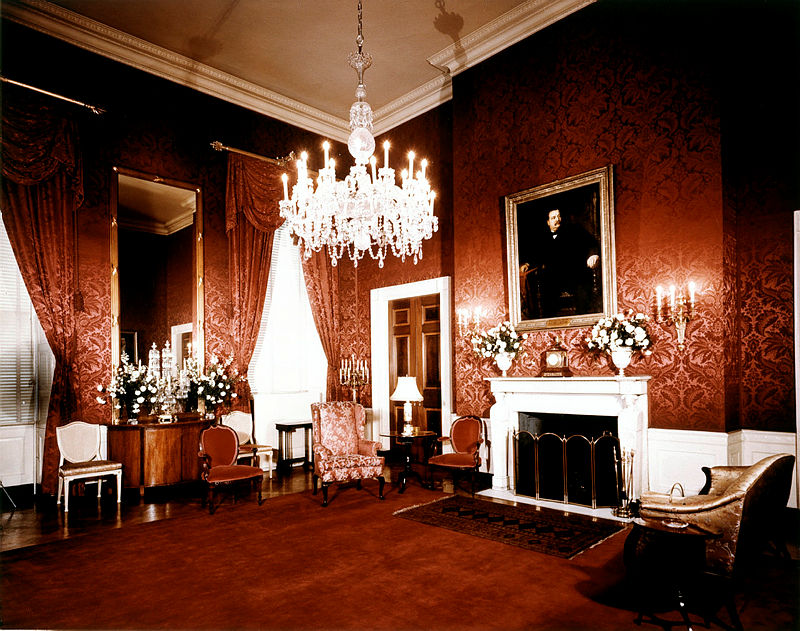 Bess, however, was limited in the time-honored tradition of not having enough money. Congress was not keen to pay for new paint after having paid $5.5M in 2021 dollars to renovate the home. Knowing their terms were limited and the budget nearly exhausted, the result was a “staid, corporate affair” that “felt more like a bank lobby” according to long-time aides and butlers.

Mamie Eisenhower and ‘all that pink’

Mamie Eisenhower, who disliked nearly every covering, plate, wall color, and decorating decision Bess Truman made for better or worse, remade the house with a “modern 50’s flair”. There’s no denying that: 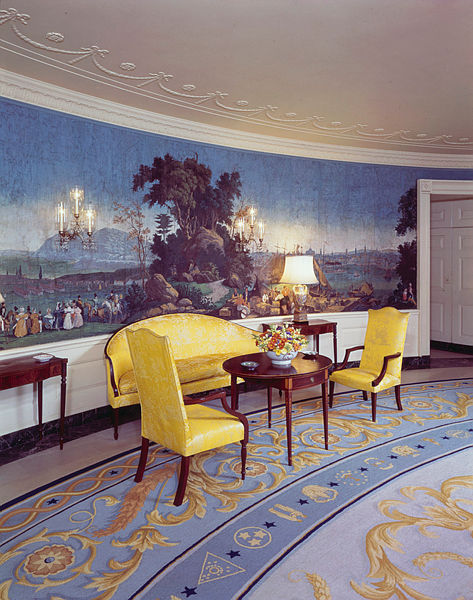 Mrs. Eisenhower was also keen of pink, which reportedly drove demand for pink kitchens and stoves in American kitchens in the late 50s: 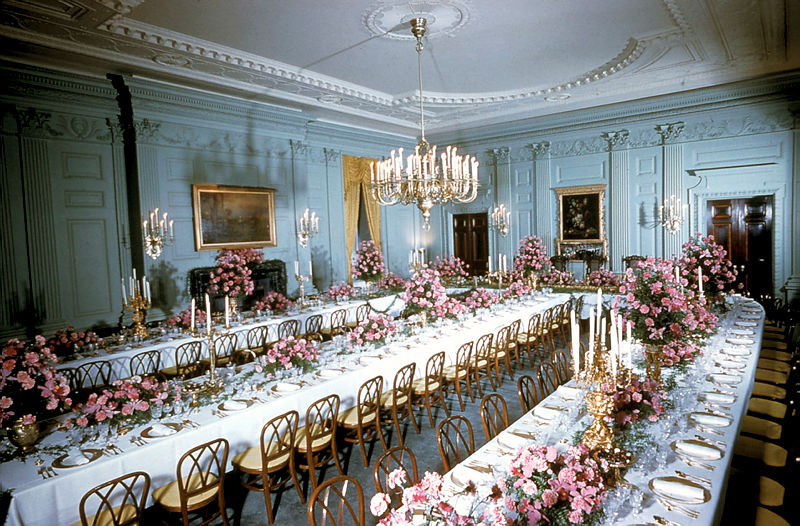 By the time Jackie Kennedy walked in, her family, having been accustomed to the latest trends and fashions, remade it once again. This time to be “less severe”, she’s reported to have said, “and much less pink”.

Mrs. Kennedy, eager to accept a $10,000 donation from CBS to film a tour of the White House, used the money to buy new rugs and repaint walls throughout the house. She also financed more renovations through the sale of a new White House guide book she edited herself. Many of the resulting changes, such as the decor and wallpaper covering used in the Diplomatic Reception Room, would stay in use through the Kennedy, Johnson, and Nixon Administrations, with several rooms earning praise for years to come for their timeless taste. 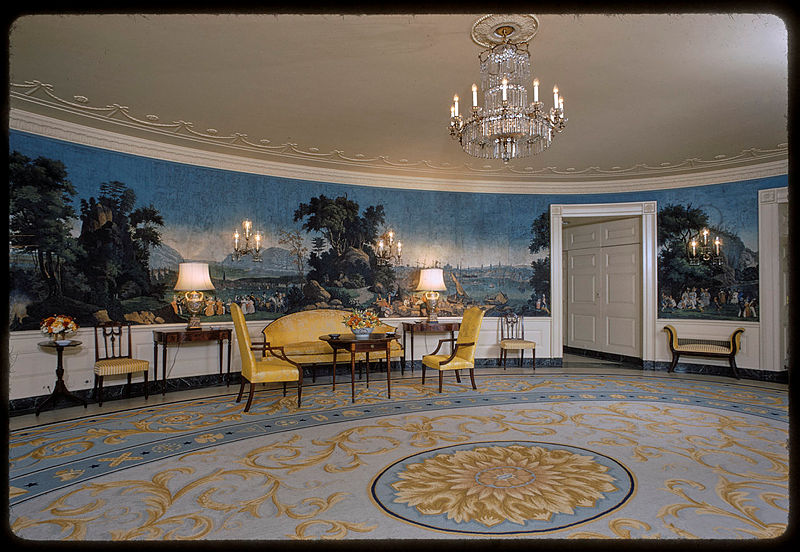 Two rooms — one to be a nursery, another the Oval Office itself — were redecorated to her tastes only to be hastily restored to the way they were. Carpenters built, then dismantled a nursery in a weekend after Mrs. Kennedy suffered a miscariage, all before she could see it. The Oval Office was being redecorated just as the Kennedys were in Dallas in November 1963. Before the room could be finished that day, it was dismantled and redone for President Johnson.

Ladybird Johnson, in the tradition of Eleanor Roosevelt, did not care much for the work of decorating, instead relying on the work of her predecessors, mostly Mrs. Kennedy’s, to maintain a status quo. 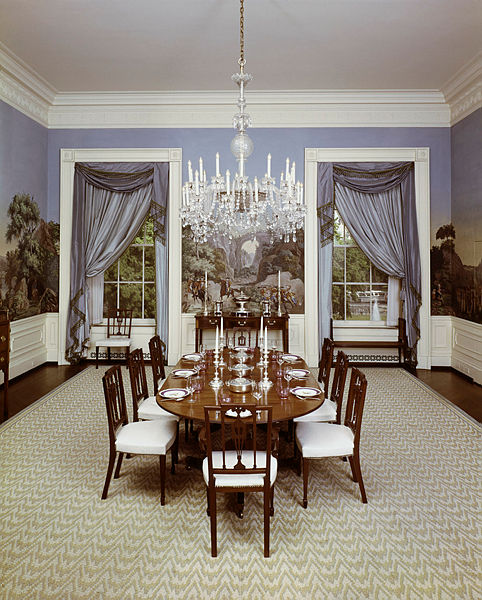 After Pat Nixon, who also was not highly interested in the decor, first ladies started the powerful tradition of showcasing substantial policy and domestic endeavors. No longer socially limited to decorating, their work and careers carried on in the substantive way Abigail Adams, Dolly Madison, and Eleanor Roosevelt pursued ahead of their time. Thus leaving many of the recent interior design questions up to staff curators, historians, and the National Park Service.

The modern era of Michelle Obama and Melania Trump

However, first ladies through Michelle Obama and Melania Trump have made a mark on the house by choosing overarching drapes, rugs, and some paint colors to match the styles of the time. Michelle Obama famously had significant influence on her husband’s Oval Office decor: 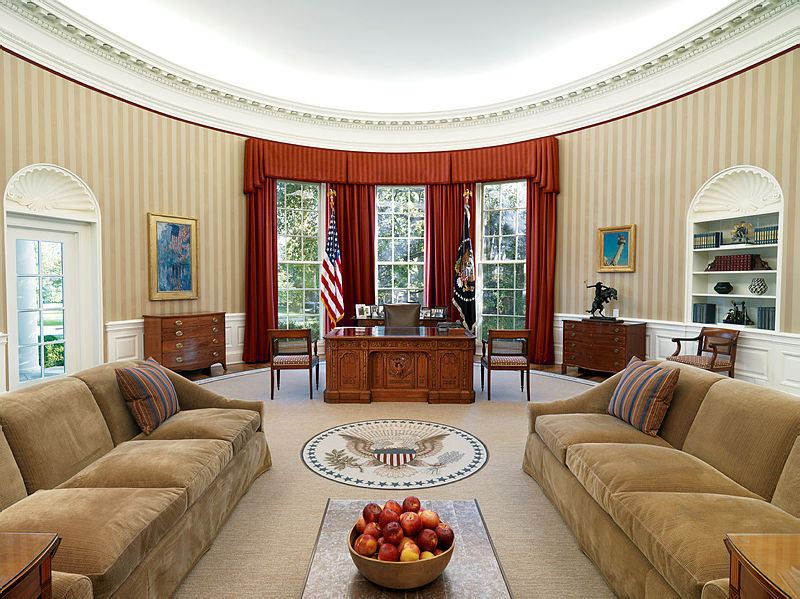 Your house is probably not the White House. Few of us can afford to undergo the sort of renovations each First Family brings, either. But throughout history, a few constants have remained: new rugs, drapes, and paint go a long way.

Mamie Eisenhower disliked all the small chairs, “not big enough for a man”. Jackie Kennedy hated Victorian mirrors, chuckling “Off to the dungeon it goes” whenever she found one hanging around, much to the horror of the White House curator. Lyndon Johnson spent four years trying to get the shower head just the way he liked it. Bill Clinton liked the same curtains George H.W. Bush used, despite their political differences. You, too, might feel the same way about parts of your home or decisions from prior owners!

When you need a substantial, obtainable, and affordable method of making a big splash, paint is the best first choice. 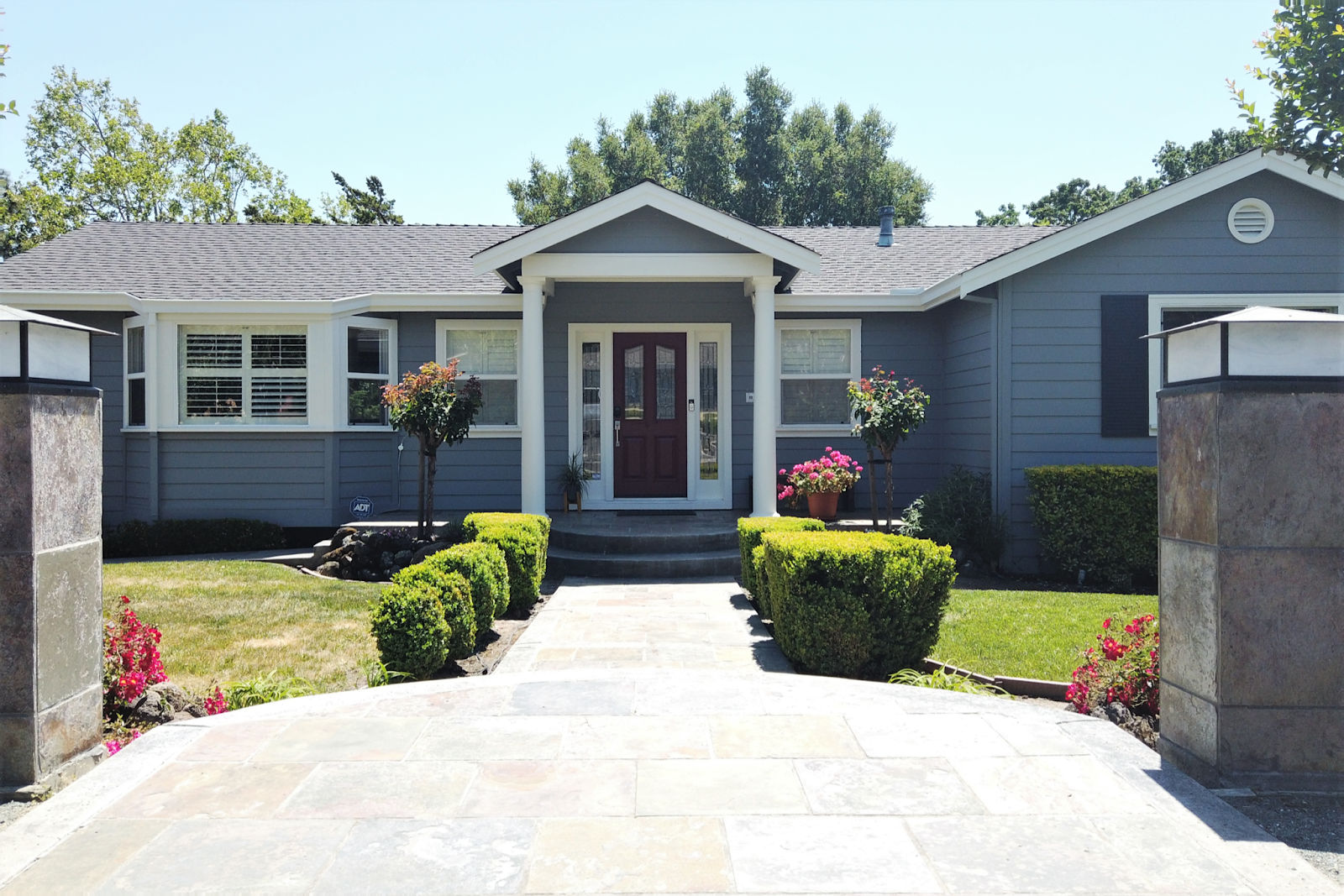 A snap of color on the front door with blue and white trim is both timeless and contemporary. A common choice for homes with stone walkways and entrances. 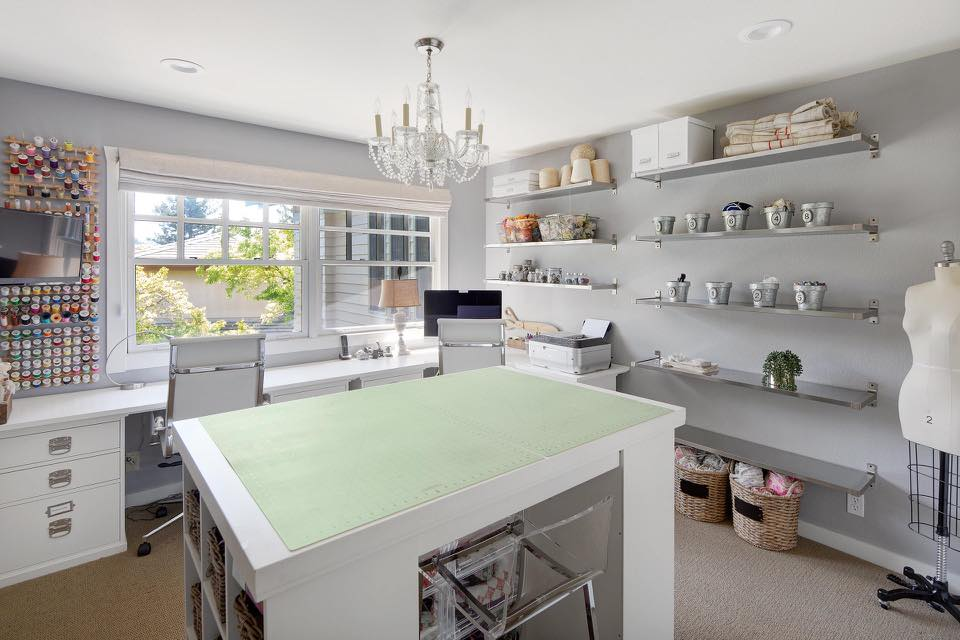 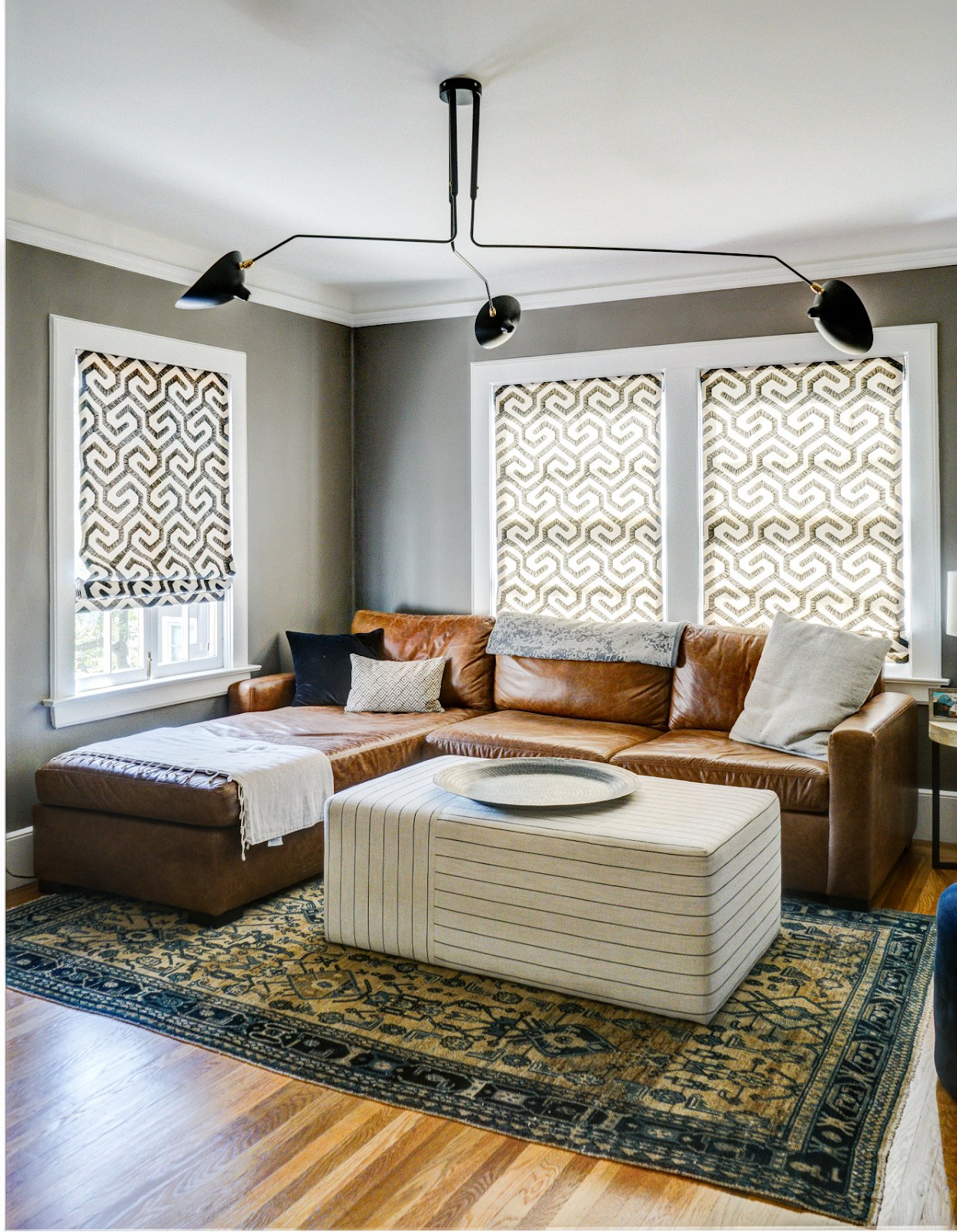 Splashy new curtains or window treatments, like these blinds, bring in texture that works well with the neutral wall and trim colors. First ladies have known a rug can really change a room. Use flooring and window treatments to contrast elements with a pop of color. 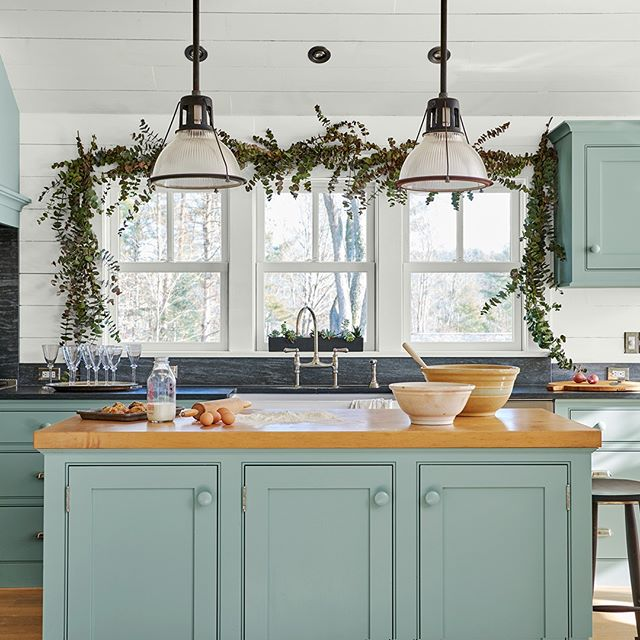 On a color palette most people might gloss right over light blues and teals, but the earthy colors work well in kitchens or spaces with significant green space. And in the absence of curtains, like seen here, greenery can be used to set off a window.

Ready to get started on picking your next colors?

Let one of our color consultants help. Contact Woodiwiss Painting today to get started and tell us what rooms you’re working with.

Additional photos from inside the White House over the years are available at https://www.whitehousehistory.org/digital-library.